In February, I have posted an article about oauth_wrap mobile webapp profile.
Now that it is unified to OAuth 2.0 drafts, here is another shot:

I have further simplified the flow by talking to Breno and John. 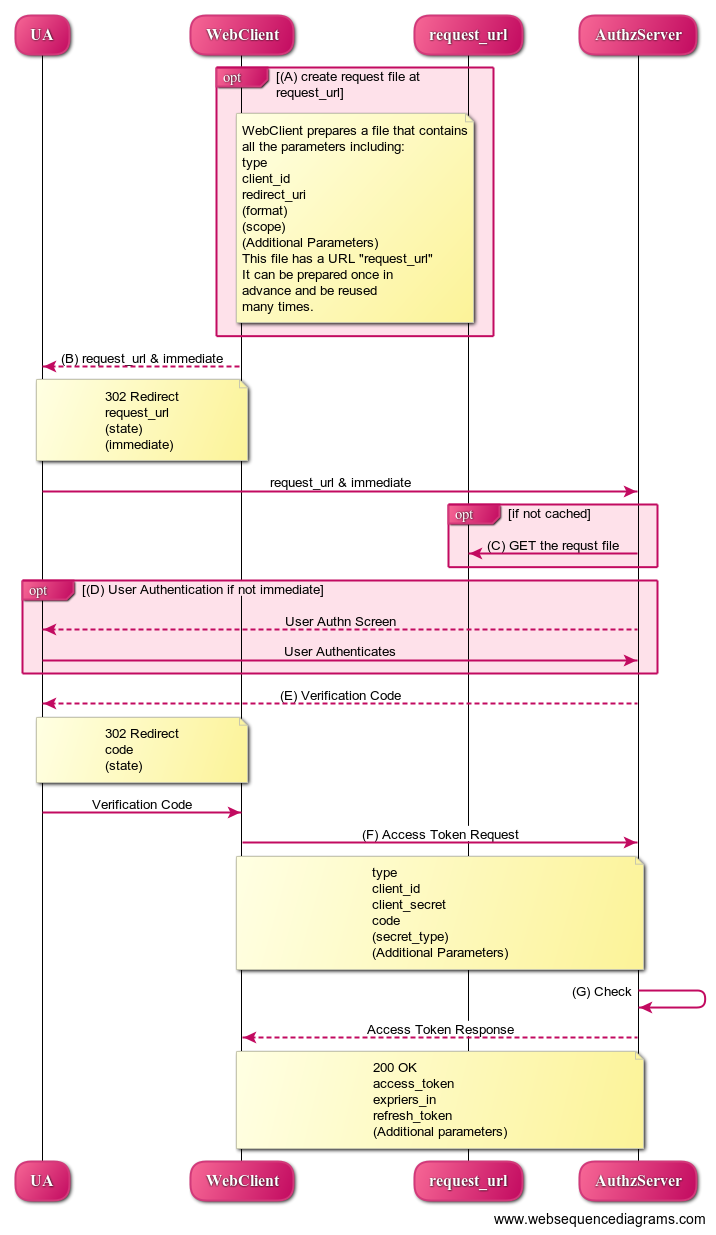 Here is a suggested text:

The moble web app flow is a user delegation flow suitable for clients
capable of interacting with the end-user’s user-agent (typically a
web browser) that are capability constrained especially for url length
and capable of receiving incoming requests from the
authorization server (capable of acting as an HTTP server).

Clients creates and saves the parameters in 3.6.1 at request_url.
This file can be used many times, so it does not need to be done
every time.

The client directs the end-user to the constructed URI using an HTTP
redirection response, or by other means available to it via the end-
user’s user-agent. The request MUST use the HTTP “GET” method.

For example, the client directs the end-user’s user-agent to make the
following HTTPS requests (line breaks are for display purposes only):

The client obtains an access token from the authorization server by
making an HTTPS request to the token endpoint. The client
constructs a request URI by adding the following parameters to the
request:

client_id
REQUIRED. The client identifier as described in Section 3.1.
client_secret
REQUIRED if the client identifier has a matching secret. The
client secret as described in Section 3.1. If it is used, the
request method MUST be “POST”.
code
REQUIRED. The verification code received from the
authorization server.
secret_type
PTIONAL. The access token secret type as described by
Section 5.3. If omitted, the authorization server will issue a
bearer token (an access token without a matching secret) as
described by Section 5.2.

The authorization server MUST verify that the verification code,
client identity, client secret, and redirection URI are all valid and
match its stored association. If the request is valid, the
authorization server issues a successful response as described in
Section 3.3.2.1.

If the request is invalid, the authorization server returns an error
response as described in Section 3.3.2.2 with one of the following
error codes:

This site uses Akismet to reduce spam. Learn how your comment data is processed.